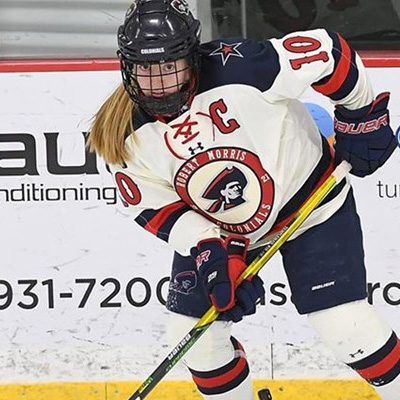 Lexi grew up playing for the Mitchell Meteors before deciding she wanted to take hockey to the next level. She played the rest of her minor hockey in Goderich, London AA and Bluewater AA before settling in Kitchener – Waterloo. She played from 2014-17 with the KW Rangers in the PWHL, where she was captain for two seasons. Lexi also captained Team Ontario at the U18 Nationals in November of 2016. In 2017, Lexi set off to Robert Morris University in Pittsburgh, Pennsylvania to pursue her dreams of playing NCAA Division 1. She played four years at RMU and was an assistant captain in her third year and captain in her fourth year, where she led the Colonials to the 2021 College Hockey America (CHA) championship. In her four years in the CHA conference, Lexi was selected to the all rookie team, the all-conference 2nd team twice, and the all-conference 1st team. In the summer of 2021, Lexi transferred to Ohio State University to play her final year of college hockey while completing her masters degree in sport management. Lexi has helped the Ohio State Buckeyes to their current 2nd place ranking in all Division 1 hockey.